Finally got my Yahoo!BB 12MB dsl working. Haven't gotten the home LAN set up yet; still wondering what to do with the old G3 and mac printer. But it sure is nice to have fat data into the apartment. Now if I can just get the company VPN working...
at 11/08/2002 09:47:00 AM No comments:

again i am confused

On the train on my way to wednesday practice in Akihabara. Almost at the station, when Kiyokawa calls me: "Dude, there's no one here. No practice tonight!"
What? Again?! So we meet at the station, get back on the train and go all the way back across Tokyo to go to Shinjuku. Then we wander around west Shinjuku for 20 minutes until we finally find the place.
Practice was great: Sano-sensei basically gave me one-on-one instruction for half an hour. But then the last draw of the evening, I snag the mouth of my scabbard and take a tiny chip out of the blade tip! Well at least I didn't cut through the scabbard and slice off my thumb, which is usually what happens. Still, it's a bummer, but then again I'd rather have a chipped sword than a bloody thumb.
at 11/07/2002 04:14:00 PM No comments:

Went to student practice in shibuya last night like I do every tuesday. Got there early so nobody was around. Went up to the gym. Locked. Asked the dude at reception and he looked at me like I was the freak I am and told me there's no practice. Doh! Totally forgot! Called Kiyokawa and he said to come to Suidobashi, so I scootered down to Shibuya Station and got on the subway. Got lost coming out of Suidobashi Station but finally found the place. Sano-san was running us through the basics, and I was a complete mess: zatsu.
Looking to test for 3dan in February, but I'm nowhere near ready. Too slow, too messy, too bobbly. No speed, no snap, no stability. On sa and yu I can't turn and draw smoothly. The first cut of ren isn't cutting, the second cut is too weak. I stop the sword too high off the ground. I have no focus. I cut small. zatsu. *sigh* Much work to be done...
at 11/06/2002 10:37:00 AM No comments:

I'll do a more thorough write-up later, but suffice to say:
1) 12 hours on a bus with a bunch of drunks is both really fun and really tiring
2) I got 1st place in division! 2nd place in team competition

Here's a couple of photos. Ohtsuka-san took a bunch, so when I get a CDR from him I'll put up more. Sekido-san and I in the finals. Note all the things I'm doing wrong: kissaki (sword point) isn't pointing at the opponent's eyes, wrist is bent up so the blade angle is off, arm is too high. *sigh* 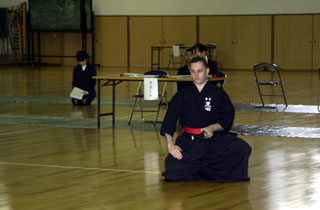 Sonkyo -- paying respect to the opponent I've just felled. Note all the things I'm doing wrong here, too: Right hand is too low, back isn't straight, chin is lowered (should just lower the eyes, but keep the head level.) 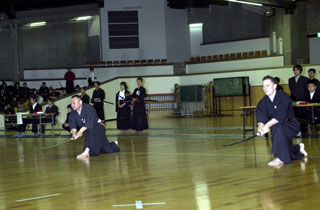 Tanaka-sensei (5th dan, Denshobu) and I in the finals for team competition. Our teams were one for one, so this was it. By some miracle, I managed to get one out of three flags, so it wasn't a complete crushing. But still, this is the difference between an uppity student and a serious instructor: besides the fact this his gaze probably burned a hole through his opponent before his blade ever cut, note how deep his cut is, blade all the way through the diagonal, hands well past his left knee, back straight but full body put into the cut, blade angle just right, kissaki the correct height above the ground.
at 11/05/2002 01:03:00 PM No comments: