Up and down for breakfast by 7am. Bright, sunny day with not a cloud in the sky. On the gondola by 9am and the day was sunny and warm, even at the top. Trails were groomed nicely, and perfect to get back into the boarding groove. Off-pist/in trees was all tracked up snow, but soft and doable. Fine weather and a good relaxing day of downhill fun.
Lunch on the balcony of the restaurant at gondola-top, more fine weather, and finally clouds starting to roll in.
Early break and into the onsen for some deep-soaking, sauna, and bathing. All-you-can-eat sukiyaki dinner; piles of meat and veggies cooked up nicely on the table. Stuffed full, the weather gets ugly: rain. Hard, nasty rain. Many give up on tomorrow and pound the bar in the hotel next door. By 10pm the rain is now snow, and hopes lift. What will tomorrow bring?
at 2/14/2004 11:00:00 PM No comments:

Got the evening shinkansen to Nagano. We basically took over half a car, and the poor unrelated folks in there with us suffered accordingly as we spun the seats around and inhaled all the beer on the train.
Bus from Nagano to the hotel and of course more revelry. Got the hotel (nice!), got paired up into rooms, and lounged about hitting up the vending machine for more beers.
at 2/13/2004 11:54:00 PM No comments:

All that deep-fried garlic I ate last night is making its presence known. As my father has indicated his distaste for reading about my flatulence, I'll leave it as an exercise for the reader to imagine the gastrointestinal implications of eating so much fried garlic.
at 2/13/2004 02:27:00 PM No comments:

I really have no place leading practice. Not only do I often forget my gear, but most of the time I don't even check the schedule and end up going to cancelled practices.
Recently, Tanaka-sensei called me saying he was asked what happened to Komatsu-chan's member dues. I had no clue and asked Sekido-san and Otsuka-san, but no idea.
So then at practice, Komatsu-chan came (because we had no Akihabara class on Wed -- I remembered that!) and I asked her who took her member's dues when she signed up and she gives me this weird look and goes "Uh, you."
So I realized I had completely forgotten to deposit the money she gave me. Called back Tanaka-sensei, who just laughed. I guess they're used to me by now.
at 2/12/2004 10:23:00 PM No comments:

Did some errands in Shibuya and found myself in the middle of a massive rightist's demo. The trucks were blaring traditional music, the flags were flying high, and for some reason the all assembled in front of the Citizen's Center, faced down a row of cops, and shouted "Kick out the North Koreans!"
In the window of the Citizen's Center was a banner announcing IT Retraining classes and after-school student playgroups for working parents' children.
The best part was all the folks like me; hanging out watching the show. Families with children stood stoicly between a line of police and a line of buzz-cut rightists, waiting for the light to change. When it turned green, an officer waved the people forward, waved the rightist truck over, and everyone crossed the street. When the light turned red and the sidewalk was clear, a skinhead (some kind of leader, giving orders all over the place) rushed the cops and was promptly pushed back and held down until he mellowed out.
Two girls on a shopping trip stopped to take a photo: one turned her back to the scuffle, faced her friend, and made a 'V' sign with her fingers while her friend took a photo of her, cops pinning down a couple of over-acting rightists in the background.
Another couple was taking photos when a young rightist jumped out of the truck and started yelling at him "What are you doing?! Taking photos?!" His girlfriend stepped between them, pushed him back with both hands, he brushed her off and continued shouting as they both walked away.
Totally surreal, as only can be experienced in Japan. 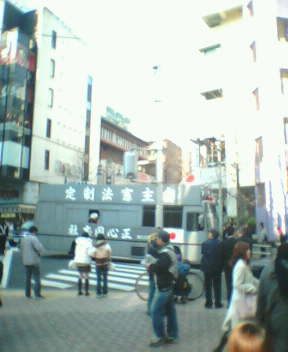 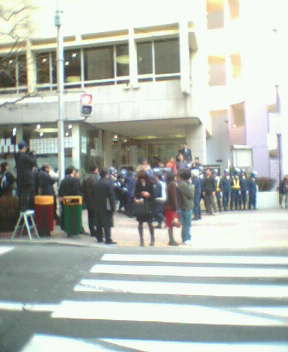 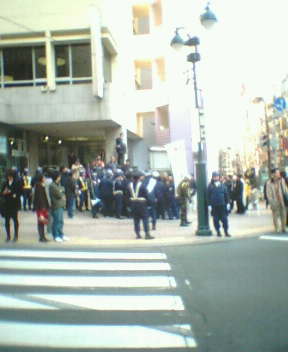 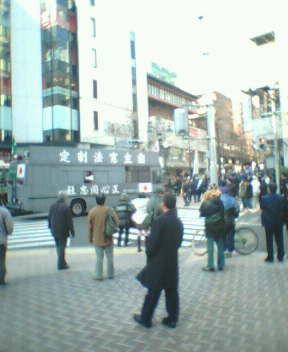 Met Hiroko for dinner in Shirogane at L'Assiette Blanche.
We celebrated our 6th wedding anniversary by enjoying some really good French cuisine at a cute little place tucked away down the street from Shinohashi. Hiroko's soup was awesome; some magical blend of nuts and spices and potatoes and lobster. My fois gras with apples was melt-in-your-mouth good and sweet. The duck main was moist and juicy and not gamey at all like duck often is. Hiroko's fois gras and venison in a crepe shell was rich and delicious; so rich we ended up taking half of it home to make sure we had room for dessert. Fruit tart, half glass of ice wine, frozen meringue covered in espresso...ah, eating well really is the best revenge.
at 2/10/2004 10:51:00 PM No comments:

Ah, the mighty gobo, how I love this crunchy, dirty root! Hiroko made a huge pot of tonjiru with lots of gobo, and I gotta tell ya, it's better than beans and potatoes -- I'm passing more gas than a Senate committee hearing on campaign finance reform!
at 2/10/2004 09:26:00 AM No comments:

Finally just about everyone showed up to practice, 5 girls and 5 guys, so it was a big old hoot, but still pretty damn cold. Can't wait for spring, though the sniffling snot of approaching hay fever is no fun.
at 2/09/2004 10:22:00 PM No comments:

Didn't realize that Sudo-san had posted the videos of the cutting demo we did at last year's national tournament. So here they are:
Tanaka-sensei -- Mawari-gakari

Nice sunny day so Hiroko and bussed down to Shibuya, hit Loft for a new frying pan and some coasters. I forgot my watch so couldn't get the battery replaced (doh!)
Then we grabbed some munchies in the Tokyu basement and headed home for lunch.
Spent the rest of the afternoon running to the grocery store a couple of times to load up on food as Hiroko cooked up buckets of eats and then I hunkered down to clean my room. From the back of the closet emerged a bag of old clothes, including a pair of jeans I bought in high school, loaned to Masa, and never saw again. Amazingly, they still fit (praise the lord for GAP Baggy!)
Masa came over for dinner and I berated her about the jeans, which she finally remembered borrowing: "They never fit me!" she exclaimed, as if that justifies her shoving them into the back of the closet years ago.
at 2/08/2004 10:39:00 PM No comments:

I've finally finished translating the letter Nakagawa-gosoke wrote to Shiokawa-gosoke appointing him 15th Soke of Mugairyu Iaihyodo. Not entirely sure about all the names, but you get the idea.
First, some history:
Along with the other high-ranking iai sensei across Japan, Mugairyu sensei helped form the ZNKR (All Japan Kendo Federation) and ZNIR (All Japan Iaido Federation) seiteigata (standardized forms.)
Nakagawa-gosoke (13th) appointed Ishii Gogetsu as his successor in Mugairyu Iaihyodo, but Ishii put himself and all of his students under the auspices of the ZNKR. Even back then, Nakagawa-gosoke had no patience for the politics and in fighting of the ZNKR. He issued hamon (expulsion and stripping of rank) for Ishii and wrote the following letter to Shiokawa-gosoke, who had just recently won the ZNKR national iaido tournament for the 3rd year in a row.
The letter:

When I came back from mailing a postcard, I found your letter and enclosed program.
As I wrote last time, be it ZNKR, ZNIR, or whatever, I don’t care one bit if you receive rank and/or certification. Until now Mugairyu was mainly associated with the ZNKR, but now it is my hope that you will spread the true line of Mugairyu.
I never taught Ishii the naiden (advanced) short sword or iai forms, so it is no wonder that Takai would screw up [the advanced form] Sangyo Icchi . They are just aping the movements without understanding the underlying principles or theory, so in my mind I don’t compare them to humans. I consider them a bunch of monkeys.
As I was returning to Tokyo, I stopped by to practice with the folks at the Kichijyoji dojo, but that dojo is under Okada sensei, so they are all ZNKR. Even if it’s ZNKR, my hope is that true and proper Mugairyu grows and spreads, and in so doing, false Mugairyu will wither and die.
It is my belief that I am the superlative Mugairyu. Not ZNIR Mugairyu, not ZNKR Mugairyu. The superlative martial artists acknowledge me. East to west, everyone in iai knows. In Osaka, ZNKR Hanshi Yoshida-sensei is famous for his sharp tongue, but my iai alone he acknowledges is the best in Japan. In Kyoto, ZNKR Hanshi Omori-sensei often does whatever he can to help me.
Even the lone wolf of Tokyo iai, Yukiyama-sensei, who bad mouths everyone, only to me does he say nothing, and at the Kanto Tournament he was explicitly respectful to me.
If you hone your heart and technique in iai such that there is no opening from any angle, then you will have no problems no matter how much those below you make a fuss.
I have received 10th dan and Hanshi from the ZNIR, but these things mean nothing to me. It is only because the superlative martial artists recognize me as such that I am considered as having a worthy menkyo.
Eishinryu with its unclear founder and lineage, ryuha that are merely a list of names from one generation to the next; most of the styles out there simply don’t stack up. As you saw in the book I published “Mugaijikiden Shindoko”, with its clear lineage, history, and gravestone, you will not find a ryuha as true as Mugairyu.
With their nitpicking and bickering, claims of authenticity and accusations and lies, Eishinryu’s Kano, Yamamoto and others are, from the perspective of iai, the lowest of the low.
As long as you do iai based on the fundamentals, no one will have anything to say. I think those in Eishinryu do not even know what the martial fundamentals are.
Recently Kano and Hirai have not been getting on, and last year Hatakejima abandoned Kano. Eishinryu is in disarray.
In Kichijyoji, where their camaraderie is strong, Ishii’s students from the police academy have been expelled and driven out to Kanagawa Prefecture. I heard this both from those in Kichijyoji and from Okada-sensei. By all means do both Mugairyu and ZNKR.
Chairman Kimura, as well as Vice Chairman Otani, and I were invited to the Osaka University tournament on the 3rd, but I am busy with visitors and unable to attend.
Please do come and visit. Last year we rebuilt the house, so you will stay here. We await you visit.
Take care.
Sincerely,