Once again it was a successful gyozafest. This time we cranked out about 500 skinfuls of delight, including tomato & beef, shrimp, tofu, & cabbage, pork & burdock root, and the traditional pork & cabbage. 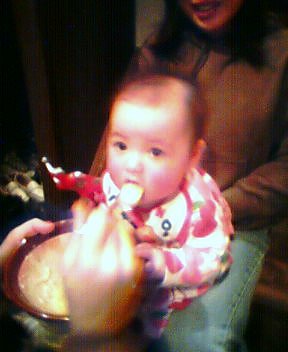 Besides being the name of one of those college bands that I was SURE was gonna make it big, like The Mr.T Experience, LAWSUIT, and Green Day, it's an accurate description of me on my mighty steed, Boing (thusly nam'd because of the AMIGA sticker affixed to the left rear panel.)
On Wednesday I rode from Ebisu, trough Azabu, past Shinbashi, through Ginza, and all the way up to Akihabara on the 15/17. Surprisingly easy, and how quick and easy it is to weave between the cars! Tonight I'll give a whirl up the same route, this time stopping just before Kanda Station, to attend Niina-gosoke's practice. BTW, it seems I am officially on for demo-ing the elusive jinrai cut on Sunday in front of everyone at the promotions exam, as a way of practicing for the Kyoto Butokusai (Traditional Martial Arts Demonstration.)

Last night Hiroko and I went to Omotesando and got haircuts from the illustrious Ozawa-tencho, store manager extraordinaire of UR. Then we walked down to Nishi Azabu Crossing and had some yummy curry at Kenbokke.
at 2/21/2003 01:39:00 PM No comments:

It's all about nosebleeds these days. I have, since an early age, been a nose-bleeder. I seem to recall my mother telling me once that she too, was a nose-bleeder. I have many nose-bleed-related memories:
Once in elementary school I remember going to our family doctor (in the strip mall near the Radio Shack I think) who looked in my nose and declared something to the effect of "You have so many capillaries right up there on the surface, we couldn't cauterize them all without burning your whole nose off."
I remember visiting New York in the sweltering heat of summer, staying at Aunt Emily and Uncle Dolf's place in the village, and waking up in the middle of the night with two-nostril flood. I immediately woke up my mom, who sat bleary-eyed with me on her lap and her fingers a vice on my nose until it stopped, a good 20 minutes later.
There was that time I was staying at my friend Sonny's house and, right before we were going to go to Splash Mountain, the water park, I got a nice trickler. His mom was a doctor, but for some reason it was his dad who swabbed my nostrils with a vaseline-laden q-tip and reminded me "Keep the nose moist. Dry makes it bleed."
And of course this morning, for the third time in as many days, I was washing my face in the sink only to see watery-red trails splashing all over the basin.
Whenever I get a nosebleed in the shower, I immediately pretend I'm a famous boxer at the tail-end of a mediocre career, who's maybe got one last fight in him. It's the 8th round, and both I and my opponent have been to the mat twice. Points-wise, I'm behind, but if I can get through his barrage of jabs and plant a couple of solid body shots on his punished ribs, I can finish him with a KO uppercut. But those jabs are making blood pudding out of my nose. I stare at myself in the mirror on the shower wall; guard up, blood running down my face and framing my lips, eyes focused, feet dancing, watch his left, watch his left, duck and cover, guard up, in with the left-left-right to the body, then he drops his elbows and I see my opening, streaking my Anvil Uppercut into his unsuspecting chin. He stumbles back, reaching for the ropes, but drops on his back, arms flailing. The ref counts...8,9,10! KO! And I raise my arms in victory, my face bloody as I shout "Adrian!"
And then Hiroko yells at me to clean the blood off of my face and stop messing around, she wants to wash her hair.
at 2/20/2003 11:50:00 AM No comments:

Ran through a few forms last night at the student's practice. I supposed to take over officially in March, but next week Kanai-san can't make it, so I'll take over from next week. Then again, we only have one practice the first week of March due to the unavailability of the gym, so it's a mild start. And yes I'm still slumping. I thought I'd work on my cutting for a while, but word from Tanaka-sensei and Naganuma-sensei is that we won't be having cutting sessions for the time being until they work some things out -- been getting a bit too loose lately and, although it is fun, it's also a serious martial art and the most dangerous part at that, as everyone is using sharp blades and swinging hard to cut targets. So I guess I'll work on my basic techniques, though I need to find out if I'm still supposed to demo cutting this weekend at the promotions exam and and/or in Kyoto in April -- if I'm still expected to perform, I need to figure out how to practice cutting!
at 2/19/2003 04:29:00 PM No comments:

Naganuma-sensei said it would happen, and it has. I am in a serious slump. Did ok at cutting practice on Sunday, but yesterday at practice I just couldn't do anything right. I spent the first 30 minutes teaching the basics to a couple of beginners, so I didn't really warm up too much, and then when we started to do forms, I was just all over the place. And from March I'll officially be in charge of teaching the Tuesday students' practice, which means even less time for my own practice...a long road indeed.
at 2/18/2003 08:58:00 AM No comments:

Mama and Papa went to Colorado last week to visit my brother Chris and his wife Sarah and their various kids, Keiran, Brittany, and Kat. 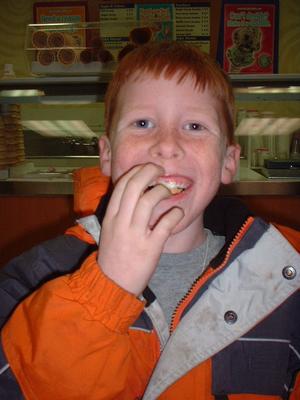 Had a sweet cutting practice -- managed to successfully cut jinrai twice, though of course the second cut always comes out as a shallow diagonal cut instead of the straight horizontal it's supposed to be.
Took some videos of Sano-san, Tamitsuji-san, and Gojyaku-san. I tried two full rolls at once but could barely get into the second one. I realized that strong shoulders aren't enough and I've got to work on my speed as well, especially for horizontal cuts.
But the best was, in the afternoon when Gojyaku-san showed up, he gave a hakama! He's the kimono-king, and I guess he's trying to support and encourage my kimono habit. It's not how well you cut, it's how good you look!
at 2/16/2003 10:11:00 PM No comments: