The day after is traditionally a big shopping day, so we headed to the Westchester Mall to personally instigate an economic recovery. First stop: Nordstroms, where I got six shirts, three slacks, and a sport coat for a bargain. Service is great, and the prices were unbeatable. The girls were doing damage in the rest of the mall, and when we regrouped at 4pm, the damage from the first wave was significant. Bags overflowed with post-Christmas bargains, feet were tired, stomachs empty. We finished up a couple last stores, stocked up on pretzels, and headed back home for a traditional dinner of leftovers.
at 12/27/2003 10:26:00 AM No comments:

Got up reasonably early to open presents and got a cool flannel robe and behind-the-head earmuffs! Traditional pile of wrapping paper was left on the carpet and then it was time to load into the car and head out.
First stop was Matthew's place. He was alot smaller when he lived next door, but now that he he lives off of Long Ridge Road he's a Tron-watching Ninja Power Ranger with a sweet radio-controlled helicopter that we used to terrorize the backyard trees. I know what I want next year!
Then we headed over to mama's cousins' place, home of Bob and Bobbie. Various people I think I was related to were there, as was a squaking parrot that immediately didn't like me. We continued to eat, more desert and whatnot, before finally leaving Long Island.
at 12/25/2003 10:55:00 PM No comments:

Finally saw Lost In Translation at the State Cinema up the street on Hope. Fabulous, and only five bucks. Scarlett Johannson was great, and I finally figured out that I remember her from Ghost World.
Killed a whole ham (spiral cut! Such technology!) for dinner, and Yuko continues to sleep. She's been out for a couple of days and at this rate her vacation will consist of seeing the bedroom walls.
at 12/24/2003 08:39:00 PM No comments:

Bagel for breakfast from the parental's exploding refrigerator. But we needed more food! So we piled into Mama's Feisty 4x4 Forester and headed to the supermarket to resupply. We hit Fuji Market first to get supplies for the gyoza feast, then the super across the street. Masa and Hiroko were fine but Yuko was still jet-lagging so she went back to bed while we battled mama's lack of a teflon frying pan and made a couple hundred gyoza. We mixed, stuffed, and cooked for hours, and then ate in minutes.

I will attempt to not make this a political diatribe but this whole terrorist alert crap is really just assinine. Flying three days before Christmas is bad enough without the government scaring everybody, the cops searching everybody, and the airlines slowing everybody down with bag checks, ticket checks, id checks. Not one security protocol I went through made any significant difference for my level of safety, but sure made flying more of a pain in the ass than usual. And the joys of eating airline food with plastic utensils! So safe!
As expected, the plane was full of families who only fly once a year, so they had no idea what they were doing, had way too many over-sized carry-ons, and lots and lots and lots of screaming children. Lots of children. Screaming. The whole time. Screaming. Crying. Shouting. Children.
At least the movie was Pirate of the Carribean, and the five hours just flew by.
Got to the stink of JFK and waited patiently as they announced that luggage would arrive on Carousel 4 twice before my luggage started arriving on Carousel 5. Welcome to New York. Not entirely sure why I bothered getting Priority tags on my bags either, because it sure doesn't make a damn bit of difference as to when my bags finally showed up.
Papa picked me up and the Mighty Myron Infinity battled traffic across the bridge and up the 95 until we got to Stamford.
We got home just as the lasagna was ready and proceeded to feast in style.
at 12/22/2003 11:27:00 PM No comments:

Somehow managed to get up and out of the house around 9am. Most folks were already at the dojo so we got started quick as some people had to leave early. Bujin-boy didn't make it for day two (I think he felt pretty lost day one...either that or his ninja skills were in full effect and he made himself invisible.)
We started with the wakizashi (short sword) kumitachi and managed to run through all five before lunch. Then Officer Crow had to leave so I hopped one one foot to say goodbye, and Neeley, Rob, and BigTony nearly died laughing.
The Arnos made it in for the afternoon session after taking their son to the hospital at 4 am; either it was food poisoning or too many pistachios at Steve's, but after some IV and rest he was doing ok. After a lunch of stunningly good Mexican food we regrouped to practice the five standing kumitachi and do a little bit of tanjo before calling it a day. The Chicago folks had to leave early, and then the toilet decided to start leaking so we pulled a quick emergency response action to pull up some mats and stem the flood.
When things calmed down Diane worked her massage magic and I turned to putty in her arms. Then she did the same to Clay and finally Tony. 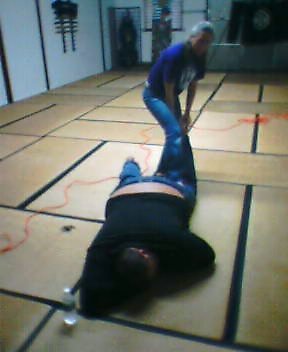 We went back to the house, took a break, and then regrouped for Full Moon Sushi. I spoke Japanese to the waitress and sushi chef, evoking responses of disbelief and wonder. The food was good but totally unrecognizable as anything I'd call sushi in Japan. Loved to Volcano Roll.
More folks left after dinner, and the typical crew ended up going back to Tony's for more goofing off before heading home.
at 12/21/2003 11:58:00 PM No comments: