Got the bus to Daimon, walked to Hamamatsucho Station, got the monorail to Haneda airport. JAL flight to Ube Airport in south central Yamaguchi, bus to Kogori Station, local train to Yuda Onsen Station, and then walked up to the Nishimura Ryokan. We got there before the bus arrived, so we headed straight for the onsen. Soaked nicely for an hour, and as we came out the gang was arriving.
Dinner was at 6 and we feasted and toasted and did the standard goofing off, then headed to bed fairly early to prep for the tournament the next day.
at 9/13/2003 11:21:00 PM No comments:

No practice so I went to dinner with Hiroko, Ericka, Haruka, and Aki. Those crazy women of LincMedia were in fine form as we stuffed ourselves on Turkish food at Ankara in Shibuya.
at 9/12/2003 11:16:00 PM No comments:

Went to Iidabashi practice tonight for the first time. Naganuma-sensei is the instructor, but it seems like he rarely shows up. It was me and Nakayama-san and a couple of other guys, just practicing on our own, with Nakayama-san and I helping the other guys now and then.
Unlike the miserable practice I had last night, tonight felt pretty good. Still nowhere near what I should be doing, but I've got a reasonable amount of control and speed. As long as I don't get to tense I might be okay. But still, I need to work on keeping the sword tip steady, nailing the cuts, extending, and relaxing my shoulders. Anyway no practice tomorrow and then off we go on Saturday for the tournament on Sunday, so at least I finished practice on a good vibe.
at 9/11/2003 10:41:00 PM No comments:

So I'm cruising down Meiji Dori, the main road to work. As is typical, the idiot in the big black Lexus in front of me decides, for no apparent reason, to put on his hazards and stop, right there in the middle of the road. I mutter a profanity and flip him off as I swerve around him, then pull up to the light waiting to turn left. The driver was not happy to be flipped off, and sticks his head out the window shouting and growling like only a pissed off Japanese guy can. Then he pulls up along side me, really blocking traffic, and lays into me again. The back door opens and out steps another guy; buzzed hair, wide double-breasted suit, stream of profanity.
Backseat Man comes up in my face and is going off. I respond in English, which REALLY pisses him off and he brings it up a notch. Then another Lexus pulls up behind me, completely cutting off both lanes. Another buzzcut double-breasted suit gets out from that back seat, as the first guy is trying to rip the helmet off my head.
The gears in my morning-groggy brain finally click: Lexus. Tinted windows. Shinagawa plates. Double-breasted suits. Buzzcuts. Streams of profanity...Yakuza. Four of them. And one of me. Not wanting this chapter in the book of my life to be the last chapter, titled "Bad Judgement Leads to End of Good Life", I gun the accelerator and rip around the corner. They follow, but I check my mirrors, swerve around traffic, run a red light, and leave them far behind.
First note to self: rich old figure-head company presidents get driven around in Mercedes. But yakuza, by some twisted right-wing nationalist logic, only drive domestic cars.
Second note to self: One yakuza punk is all mouth. Four yakuza punks is sure death. And yakuza never travel alone.
at 9/11/2003 10:09:00 AM No comments:

Finally got the Thinkpad 240 working. Had to boot from a floppy with pcmcia drivers for the cdr drive, then install a ghost image of Windows 98SE, then switch to the LAN pcmcia card to get a bunch of Windows updates, get the latest driver for the wireless card, restore a bunch of messed up system files, and finally I got the wireless card to work and the system reasonably stable. It's a shame, but W98 is way faster than RedHat 9 on a similar machine. I guess Linux on the desktop still has a way to go. Anyway, at least Hiroko can now check her email from the comfort of her own desk in the bedroom. Plus it's got an all-day battery, so if she wants to wander about, the battery lasts about seven hours.
God bless technology.
at 9/09/2003 11:57:00 PM No comments:

Kasahara-kun is the only one who showed up to practice, so I schooled him in front of the mirror the whole time. We worked on gyakugesa, first the fundamentals, then a few kata. He's better and more dedicated than most beginners, so working with him and pushing him is fun.
at 9/09/2003 08:53:00 PM No comments:

Attempts to get my Linksys WPC54G wireless card to work on Linux haWPC54G PCMCIA have failed, and google tells us that the Broadcom chipsets on the card do not yet have drivers released. So I mailed Linksys, and here was the so not helpful reply:

Thank you for your inquiry and your interest in Broadcom Corporation. We are big supporters of the Linux community, all our APs are written for Linux, but our clients are currently Windows only. We thank you again for your input and hope we can accommodate more clients in the future.

Taught a couple of beginners for the first hour of class, then practiced on my own for the last 20 minutes. I'm screwed for the national tournament: I suck and there's no time to get good enough to win. Maybe if I'm lucky I'll make it through my first match...
at 9/08/2003 10:12:00 PM No comments:

Met Kevin, Packy and the gang in Omotesando and we did the full tour: antique flea market at the temple, trendy shopping, crazy t-shirt store, rotator sushi, freaks at the park, Meiji shrine. 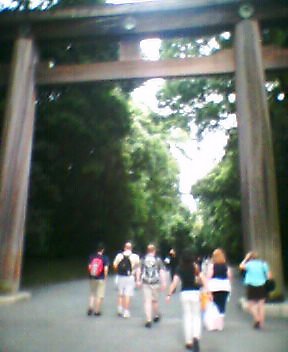 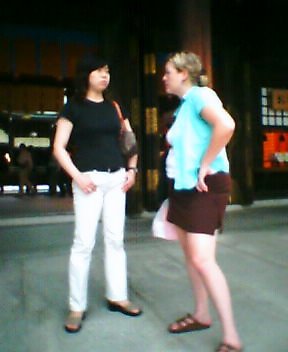 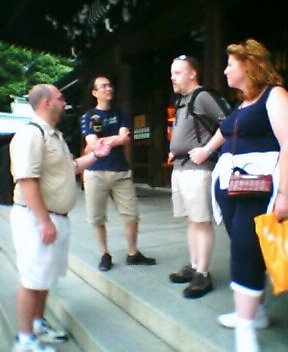 Kevin then lead us back to his cool neighborhood Shimokitazawa where Z joined us for some stunning French food at his local hangout.
And everywhere we went there were local festivals, so the tourists got plenty of photos of locals carrying omikoshi (portable shrines) and doing the local festival thing.

Inspired by Kevin's recent antique furniture purchases I got it in my head to get me something to keep all of our kimono, so at Oriental Bazaar I saw a sweet piece, Meiji era, including secret hidden drawers, but as I was looking at it the dude came and carted it off, saying they just sold it this morning! Totally bummed I went upstairs and kept looking around, checked out a few others but the didn't inspire. Dejected, I went over to look at other stuff and noticed a low chest. Turns out it was a two piece but they weren't stacked, just sitting low back-to-back. As soon as I pulled open the drawer I was hit with the sweet smeel of paulownia. Paulownia (kiri) is traditionally used for furniture meant to store kimono, something to do with natural bug repellence maybe? Anyway it's a very light, strong wood. The drawers were very thick-walled, dove-tailed joints and all wooden-pegged, not nailed. Simple but burly metalwork on the locks, all the keys included. The face and side had been retreated, but other than that it was all original, Meiji era so probably 100 years old or so. Opened the lower right cabinet, pulled out the lowermost small drawer, and there was the secret drawer! For only 150,000 yen, I checked with Hiroko, and grabbed it. Kevin said if I didn't buy it he would have bought it himself, being a pretty rare paulownia chest.
at 9/07/2003 10:21:00 PM No comments: