The old gang was in full swing. With Jeremy in town from LA, Kev and I and Jer met up and did Electric Town just like the old days. Many buildings have changed, but we still got the traditional doner kebab (from a proper street vendor stall not a truck these days), checked out the junk and latest toys, and enjoyed the fine weather. 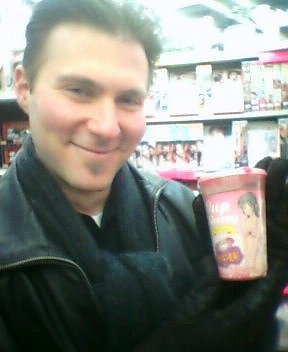 Too much BBQ'd meat! Niina Gosoke treated the gakuren (student's federation) to an all-you-can-eat buffet; mostly meat but also Chinese, sushi, icecream, cakes, and lots of drinks. Stuffed myself silly whilst Gosoke talked about his days in South America, wandering alone around the Amazon doing research for construction sites or something. Everyone else was getting mugged and kidnapped by rebels, but in all his time no one ever messed with him. Must be that vibe he has!
at 3/07/2003 10:54:00 PM No comments:

Ando-sensei gave us some detailed grilling on using the hips, drawing back deep with the left hand to get the blade out quickly, and cutting without leaning forward off balance. Tough to get the hip and shoulder to work together, even tougher to do it at any reasonable speed. Out of a couple hundred tries, I think I had one that felt almost right, but was so slow...gotta start somewhere, though.
at 3/05/2003 10:51:00 PM No comments:

Once again a freezing practice with the students. Feet went numb, and since there were two fairly new kids, I spent alot of time on basic with them and left the others to run through the kata themselves. Cold practice is no fun when you're not practicing much.
at 3/04/2003 10:00:00 PM No comments:

On Kevin and Zareen's recommendation, we rode the monorail to the Antique Fair at the Ryutsu Center at Heiwajima.
Very cool! I love old Japanese furniture. Looked for some sword parts but didn't see anything to thrilling. Also saw many a cool tea cup, but all the nice ones are thousands of dollars -- a bit pricey for something I'm most likely to drop and break!
at 3/03/2003 10:49:00 AM No comments:

Hiroko and I headed over to Jeff & Ericka's last night for a regularly scheduled bbq. Ignoring the pissing rain, Jeff ignited the napalm and had white-hot coals in a matter of minutes, and putting his Intelligent Meat Fork to use, we soon had grilled chicken, pork, and cow. Together with some famous mash'd potatoes and a nod to greenery with a salad, the feast was on. Nancy managed to only stick her finger in the potatoes once, and actually left some for the rest of us to eat. Kevin and Zareen talked about the cool antique dresser they bought at an antique fair, Ollie and Chiori showed up, with The Guy Behind The Guy Behind The Guy Jeremy in town for a week on bid'ness. Stevie showed up after hitting a job fair with Kyle:
[at the Porsche booth]
Porsche dude: So we're looking for accounts, finance guys...
Kyle: You need any stunt drivers? I can drive real fast!
At least he got the phone number of the chick at the Porsche booth.
Stevie got some leads but we'll see. In the mean time Nancy is the guarantor for his apartment, but if things don't go well for Stevie we figure he can just move in with Nancy!
For desert Hiroko busted out the now infamous Strawberry & Blueberry with Balsamico Sauce and Vanilla Ice, and we finished they evening by holding our expanded stomachs and groaning pleasantly while trying to catch a cab in the rain.
at 3/02/2003 10:25:00 AM No comments: