Roadster and The Other Balding White Guy at Yoshida House.

Headed southwest from Shimokitazawa to celebrate at Them Yoshida's place. Saw their killer honeymoon photos taken in Taiwan. Seems the cool thing to do in Taiwan these days is to spend a couple hundred bucks and get an all-day photo shoot, resulting in a heavily photo-shopped and very cool photo album. Also ate massively delicious food, as all of Yoshida's friends from Orange Page can cook something serious! KY and The Fish gettin' jiggy wid it.

Scrambled to the dojo and back in time to make the company X-Mas party. Much food, much more wine and bevvies, enough silliness to go around. About 11 we headed to the seedy pit that is Roppongi, packed 200 people into a bar the size of a small couch, wandered down the street to the The Place Downstairs From The Really Sketchy Place, and I managed to get home before 3am. The rest of the crew...?

Met Buenavista early and cruised up to Honbu Dojo for some early morning training. Weather was cold and my shoulder felt stiff so I took it easy.
In the afternoon we headed up to Akihabara for the beginner's seminar. Good turnout with about 30 people. Always fun to teach the beginners; the lack of any preconceived notions means they're not burdened down with what they think they know and therefore they pick things up really quickly. It was a long session but at the very end when I forced several people to test for kyu promotion we were all tired but satisfied. Or at least I was!
Headed back to Honbu and ran through the last part of my 6dan test. Still can't do the kata maegoshi well, and Gosoke chewed me out for that. Then everyone present got to choose one of the forty hyakusokuden (old Japanese poetry) to test me on. Gosoke would say either the first half, and I would have to complete the verse, or he'd say the second half and I would have to provide the opening line. I just barely passed, getting eight of ten correct. The last two I couldn't remember a couple of words, and both of them were when he provided the ending line and I had to remember the opening. That, combined with the stress of sitting in the middle of the floor with everyone watching, and my mind basically blanked.
But anyway even though I couldn't do the most basic of techniques and forgot all kinds of stuff, Gosoke passed me more out of pity than anything else.
Now I can really begin training, finally!

Came home and hiroko and I attempted to recreate the joy that was Genghis Kahn. She bought a rentan 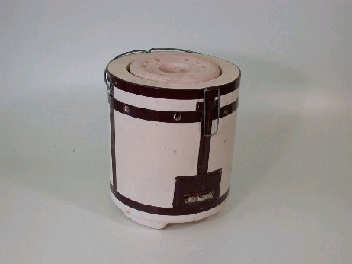 which is different than a shichirin: Shichirin is wider and shallower and uses charcoal, whereas a rentan is for special charcoal called, well, rentan: 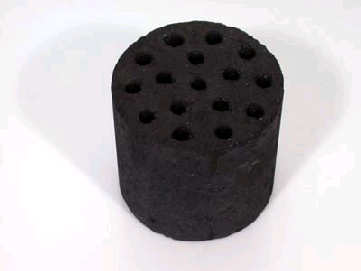 We got the genghis 'helmet' plate:

and used the meat we bought and shipped from Hokkaido.
Unfortunately, the rentan is kind of deep, so the coals were too far away from the plate, but it all worked out in the end. It was cold on the balcony, but we persevered and had some fine eats.
Of course, by the time were done, the coals were a perfect white hot.
So for next time: put a grill or something in the bottom of the rentan to lift the coals up closer to the plate and to allow more airflow, start the coals early and let them burn for an hour until they're all white hot, and don't go outside until it's time to eat, because it's cold!