After cutting practice Hiroko and I went to Ginza and walked around. They had the main street closed off for foot traffic only, so did the standard wander about. Dropped off some shoes at Camui; fix my and her sandals and resole my boots. Then we checked out Seibu, Gap, J Crew...as suspected most of the girl clothes are made specifically for skinny, curveless Japanese women, so of course Hiroko can't find anything that fits right.

Shopped out we headed over to Ichikawa and hit Master's Kushimasu. 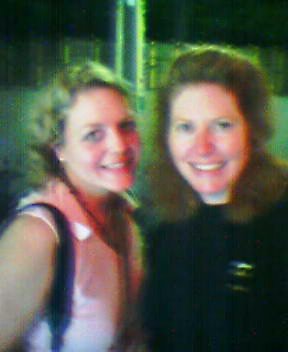 Packy, his wife Kelly and friend Julie are in Japan for a couple weeks, so the old gang got together. Hugh and Mami's three-year old bundle of energy Toshiki was tearing up the street while Steve and Oide's two-year old Cain sat quietly playing with his toy cars. Hugh bought some land and is building a house for about 40 million yen. Which in my neighborhood wouldn't even get you a one-room condo. Ah, Tokyo.
at 9/06/2003 11:10:00 PM No comments:

Had cutting practice in Ichikawa. Did fairly well so I think I'll be okay for the demo at the national tournament next weekend. Probably do jinrai -- don't want to try anything too tricky. Managed one decent yoko-ichimonji as well, but still can't nail it consistently like I can gyakugesa. Need more practice.
at 9/06/2003 01:03:00 PM No comments:

Showed up at Nihonbashi, and the place was strangely dark and empty. Called Sekido-san who reminded me that we keep an updated schedule on the homepage for a reason. There was no class scheduled, I just assumed there was. I do this alot. You'd think I'd learn, but I don't.
at 9/05/2003 06:59:00 PM No comments:

The team was rallied and the food was plentiful. After goofing off and chatting it up with the equities boys, I went over to The Outback Steakhouse and met Spike, Alex, Moka, Bystedt, and Hiroko for some serious feeding. Hammer was just finishing up dinner with his family as we were starting. Hammer's kindness knows no bounds: after he left the waiter said he bought us a round of beers. So of course I took a photo of everyone with their beverages and emailed a thank you to The Hammer. Gotta love technology!
at 9/04/2003 11:05:00 PM No comments:

Took an old Thinkpad 240 and built it RedHat 9.0 -- really simple; just made a boot floppy and did an HTTP network install. Of course once I got everything setup I realized there are no linux drivers for the latest and greatest Linksys 54G wireless card I bought. So I guess it's back to Bic Camera for a cheaper older supported wireless card!
at 9/04/2003 02:12:00 PM No comments:

Just after I got to practice, the skies turned a menacing gray, then black, then thunder and lightening erupted and rain fell in buckets. Then the lights flickered. A nasty storm cloud swept across Tokyo, in and out in less than an hour, but the damage was done: flash flooding. Scores of commuters caught without umbrellas, surface trains delayed.
Took a while for the gym lights to cycle back up to full power, but we started practice anyway. I ran everyone through the basics, then Tanaka-sensei showed up and we did the last 10 kata.
Niina-gosoke also came in about 8pm, worked out in the corner on his own for a bit, then when class was over called us remaining stragglers over for another hour of fun. "Ren, ever since you came back from the states, your cuts are small. Small! Too much cutting whatever's right in front of you. Cut your enemy! A human enemy, with a sword and skills, who retreats and attacks! Not an enemy made of stationary straw, waiting to get cut! Cut big! Chase and cut down your enemy!"
About a week to go to the national tournament, and I've been so worried and focused on the cutting demo that, as expected, my kata is getting small and week. And my shoulder still hurts, because I refuse to rest it until the tournament is over.
at 9/03/2003 10:06:00 PM No comments:

New guy who just started came to practice for the first time. Always looking for an excuse to spend all two hours on nothing but basics, I ran him and the other guys through the serious fundamentals. We started just practicing how to walk up and down the hall, focusing on upper and lower body coordination, keeping the hips steady and the feet moving enough but not too much. When we finally got around to using our swords we took our time doing basic stances, moving in and out of high, mid, and low kamae before actually cutting. We concentrated on hand positioning, blade movement and arm mechanics, as well as timing with the lower body, and of course maintaining total bodily stability while moving and cutting. Also talked a bit about line of sight and the relentless pursuit of eliminating wasted, unnecessary movements. After two hours my right shoulder was twinging in pain, but I've got less that two weeks until the national tournament, so I'm not resting it; plenty of rest when I'm dead.
After class I hurried home only to discover that the 9pm conference call I thought we had, we didn't. So Hiroko and I watched tv while eating a heavy-on-veggies dinner.
at 9/02/2003 11:19:00 PM No comments:

Tanaka-sensei is getting bogged down with work at his metal shop, so it was just five of us in practice today. I took Mizuno-san and ran him through the fundamentals for over an hour, paying attention to hand placement, upper body, and extension. Can't overload beginners with all the things they're doing wrong, so I just pick two or three things and focus on those, letting the other pieces come together as they progress.
Last half hour I worked on my own, preparing for the tournament on two weeks. I'm so hosed. My forms are a messy; sloppy and slow and lots of extraneous wobble. Sword won't go where I want it to, won't stop where I want it to, too much tension especially in my arms and not even snap, not enough focus. I also have cut in a couple of weeks and it doesn't look like there will be a cutting practice before the tournament, which makes me kind of nervous to cut in front of everyone at the beginning of the tournament.
at 9/01/2003 11:14:00 PM No comments:

Niina-gosoke himself ran the seminar. He started with the basics: how to put the sword properly on the hip -- though most of us where only one sword, we train in samurai arts, not as yakuza, so we wear the longsword as if we had two swords. This means the longsword goes over the top belt of the hakama (the belt from the front), then under the top two layers of the obi, and under the middle belt of the hakama (from the back), then over the last belt of the hakama (from the back). The short sword goes in front of the stomach, sideways, under the hakama and first layer of the obi. I don't have a short sword, but have started wearing my tessen (steal-edged fan) to approximate the feel of having a second sword. Having something in that position forces the right hand to properly move under and take the tsuka from below/behind when drawing. It also helps keep the back straight to keep the pressure off the stomach.
For three hours he ran us through all 20 kata, highlighting the general points the pretty much everyone screws up.

After the seminar we went to an izakaya for drinks and snacks and Naganuma-sensei told the story about the first time he cut from a seated draw in front of everyone, and talked to me about his kobudo and karate study, and the importance of taisabaki, which most translate as "body movement" but in this case he meant minimizing movement. The idea is to move from a state of readiness; no wind up, no telegraphing. To move back, you don't push off with the forward foot, resulting in a slight sway before moving. You just move back. You keep the head still, and the body moves effortlessly as one. Very tough to do, but if done right, that slight minimization of unnecessary movement makes your technique that much faster.
at 8/31/2003 11:54:00 PM No comments: