Drove up to Emy and Dolph's place in MA. Had a BBQ. Lay around in the yard and read. Finished Richard Morgan's Broken Angels. Liked it at more than Altered Carbon. This guy better keep cranking out quality sci-fi or I'm gonna have issues.
I taught Kieran a new smile: 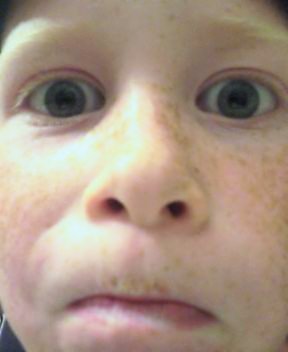 So my brother Chris and his wife Sarah and her son Keiran are staying at my parent's house. Fun fun fun! I hooked up The K-man with some cool Naruto battle pencils, a Naruto headband, and various t-shirts. Mom got bunches of material to split with Aunt Em so that I can get some more cool quilts. Dad got neat Japanese towels for all that running he does. In typical fashion, the refrigerator was packed and the house was freezing cold. 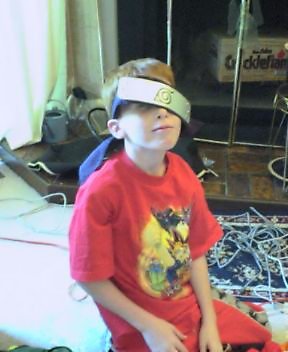 Grandma came over for dinner, as did Charlie's family. And again, too much food, too much silliness. Grandma didn't stop talking the whole time. 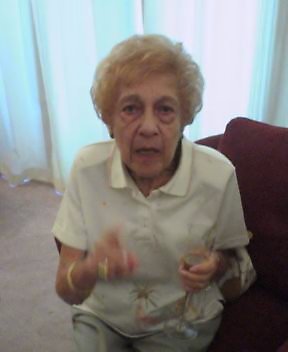 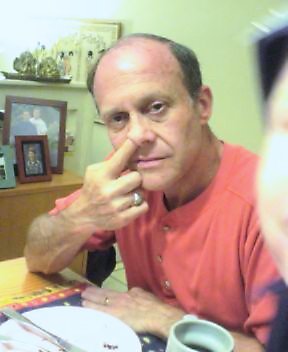 Lee and I went to Soho for lunch and met up with Hiroko and Charity. Too bad we didn't get more time to spend with them, but at least we all got to see each other. 70's Steve came down as well and told us many tales of his the lunacy he calls his past.
at 9/02/2004 01:31:00 PM No comments:

All day brain-storming with the Vizible team. Anthony stuns with his polygon prowess. Todd sells like it's 1997 at Netscape. Lee maneuvers the feeble-minded, and I explode in an IT storm of wit, wonder, and impatience.
After work we congregate down at the local Wall Street watering hole. A bucket of beers, Vicki comes down and (karma karma) is turns out to be friends with Burnett's sister. Hunger sets in, so Anthony, Todd and I head back to the hotel for late-night grubbing. Me and Anthony go back to his Diamond Suite to plot the downfall of Adobe, Macromedia, and Microsoft, and Todd joins Lee and the gang for an evening of live music and more beverages. 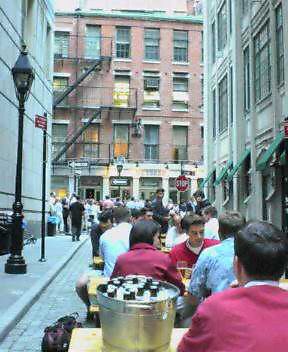 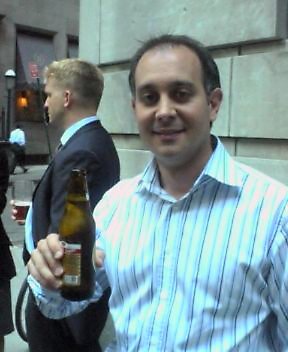 Actually did some work today. But enough about that. After work we went back to Messinger's hotel, the Soho Grand, for pre-dinner beverages. This is one of those incredibly trendy and cool hotels with a great interior and way too much air-conditioning. It was freezing. But the cocktail waitresses wore slick black evening gowns and cool hipsters wandered in and out of the bar all night.
We had dinner at a cool local Italian place that Lee picked, and wonder of wonders the French waiter was a dude he hung out with in Bora Bora on his honeymoon a few years ago.
Todd from Vizible, being the wine-freak, was in charge of ordering, but managed to pick to loser bottles. Anthony drilled him on that, but Todd was, as always, too jazzed on life and wine to care. And Anthony really is an MIT-grad, start-up Chief Architect GodDamn Genius.
at 8/31/2004 11:21:00 PM No comments:

Ex-marines make good building security, especially when dressed in Navy blue uniforms with combat boots and backed up by lotsa cops and the occasional M-16 toting National Reservist.
We had dinner at Five Points. Serious quality food. Steve from Barnett Consulting joined us. As Lee put it, the 70's were good to him. Brilliant guy. We shall do dangerous things together.

Lee in his element: 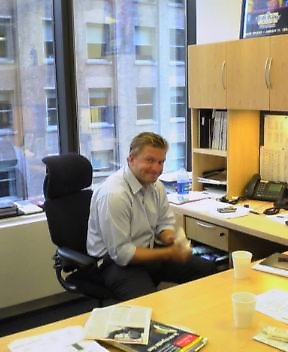 After breakfast we cruised over to Bob Elder's martial arts supply shop. I learned how to hold a .45 and an AR-15, sold 2 wooden swords, looked at some neat antique blades, and talked lotsa smack.
We went back to the hotel for lunch and then I bummed a ride back to the airport, went to the wrong counter (American not United!) and got on my flight to LaGuardia.
Ah, domestic fliying from Orlando to New York. What a zoo. America is a great country in that anyone can afford to go to Disneyworld for the weekend. Even those who are, by definition, too stupid to be allowed to cross state lines.
The dude with the big hat. The woman in the wrong seat. Twice. Next to me. The guy eating apples. The old man offering his seat to his wife. While the plane is ascending after take off. Everyone on a cell phone. The crying baby. The screaming child.
And then there's LaGuardia. Won't even comment on the nightmare that is getting my luggage and out the airport and into a cab.
Got to the Millenium Hotel, directly in front of Ground Zero, about 9:30pm. Manhattan eerily quite. Too quite. Cops everywhere. And to top it all off, the only Chinese delivery place in the neighborhood decided to close early, forcing me to eat room service. Nice room, though; widescreen flat panel, slick modern furniture, Rhode Island Republican delegation down the hall.
at 8/29/2004 11:47:00 PM No comments: