more for your money

Explain to me how this is going to help the US economy, even remotely...

Senate Passes $350 Billion Bush Tax Cut
John Breaux, D-La., failed in his attempt to repeal a tax increase on Americans working abroad. Those workers would no longer be able to exclude the first $80,000 of their foreign income from U.S. taxes, but they could claim a credit against any foreign taxes paid.
at 5/16/2003 02:56:00 PM No comments:

Getting a bit chillier these days, with a steady rainy drizzle. Went to practice and ended up teaching as Hohsina-san ran a mock-promotion exam for those testing this weekend. At the end of class two people ran through a mock exam in front of everyone, and at the end of the first one Niina-gosoke promoted him on the spot, after correcting some basic points about etiquette.
The Niina-gosoke ran the upper-ranks through his traditional hour of torment as we all got reminded just how lame we are.
at 5/14/2003 10:35:00 PM No comments:

once again the magical joy that is the local japanese bureaucracy

So I finally got the police report filed correctly for my stolen Mighty Steed, and went to the local ward office to file an application for termination of taxes on the scooter I no longer own.
I had the form filled out already, including the police report number. Handed in the form and was out in a couple of minutes. Simple! I was half-way out of the office when I heard the guy running after me shouting my name:
him: Mr. Kuroda! Mr. Kuroda!
me: yes?
him: You forgot to turn in your scooter registration.
me: Registration? I don't have it. It got stolen with the scooter.
him: Your scooter was stolen?!
me: Uh yeah. That's why I have a police report for a stolen scooter referred to on my application to stop charging me taxes for a scooter I no longer have...because it got stolen.
him: [deep thought, furrowed brow] Oh...right...could you come back here for one second?

So we went back to the desk. I discovered something at this point through Socratic Logic:
He was a desk head because the other people in the office called him "Kakaricho" (Leader of a subsection/division; middle-to-low-level management)
Deskheads spend all their time Heading their Desks instead of actually Doing Work, so he was totally incompetent
All Deskheads are incompetent

Not the most beautiful logic but you get the idea. First he had to cancel the previous Mystery Transaction. Then he had to verify my police report by calling the police station. (At this point I realized that anyone can call the police station, claim to be a bureaucrat in a government office, and get all kinds of supposedly private information about anyone by inquiring into matters of police activity). Next he had to input a new transaction to process my application, then correct the date from the default (today) to the day the stealing took place, according to the police report. Then he had to print the transaction confirmation.
All along he had problems and the lovely part-time housewife with the blue apron and the nice smile kept coming over and going "Remember you have to hit the enter key here..." or "The second page gets stamped, the first page initialled..." Our belov'd kakaricho couldn't get the paper into the printer. She dropped it in and got it to print on the first try. Our hero couldn't go back to the previous screen. He called the helpdesk (5209, if you're ever in the ward office on an internal phone) and stared at his keyboard, befuddled, going "F 1? OK I'll try..." and attempted to hit both the 'F' and '1' keys at the same time with his left hand, while his right hand held the phone to his sweaty ear. I could see the F1 key, I could just reach out and hit it myself, I could just run away and put all this behind me, I could just wrap the phone cord around his splotchy neck and pull until his eyes bugged out even more...
at 5/12/2003 02:08:00 PM No comments:

Erikacchi brought her 2 year-old bundle of energy Kaily over to play. We bought a bubble-blowing duck at the toy store in Azabu-jyuban, then went up to the kid's playground in Roppongi Hills. She wasn't crazy about the woodchips on the ground, but she loved all the slides, so I had to carry her from the bottom of the slide to the platform. She had no problem walking up the long stairs from the bottom of the hill, as long as I walked behind her and she held onto my fingers.
We came home and made pizzas (note to self: if reborn as a chef, open a pizza restaurant; I'm that good) and drew pictures and ate blueberries and played hide-and-seek and watched tv and at crackers and drew pictures and jumped on the couch and ate strawberries and ran around and drank juice and drew pictures and ate a banana and played hide-and-seek and ate pizza and watched tv... 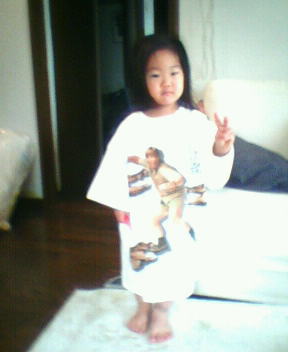 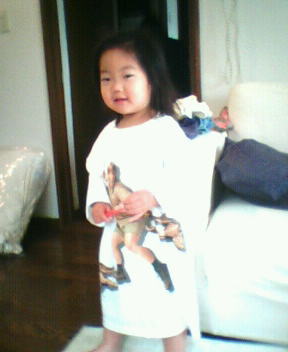 It was late so they stayed over (Kaily borrowed Hiroko's Crocodile Hunter t-shirt), and the next morning they were already up by the time Hiroko and I got up. Hiroko made scones and I fed Kaily a kiwi fruit and she wasn't too crazy about the tomatoes and eggs or the scones so she ate another kiwi fruit and then after playing with the mirror in the bedroom one last time they went home.
I went the iai in the afternoon and I was already damn tired. We had a seminar for kumitachi (paired forms) and Kiyokawa and I pummeled each other, but he had a black oak sword and my measely pine was no match for it, so Otsuka-san lent me an extra-thick (and heavy) wooden sword and Kiyokawa and I pummeled each other some more.
at 5/11/2003 07:38:00 PM No comments: