Well, the judging is done, and Senpokan dominates once again. Swept 16 medals, and our boy Colin won the overall and got a new sword from Howard Clark, a free polish and handle, and fittings.
Niina-gosoke and Yamada-sensei's demonstration went really well, too. I even came in second for the cutting division I was roped into last second.
After the tournament we went back to the BBQ place, ate well, and waited forever for taxis to take us back to the hotel. 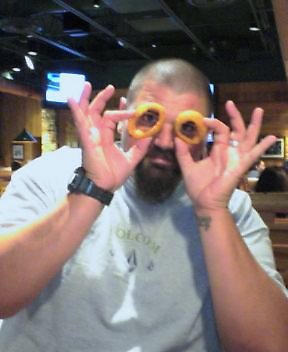 In the afternoon we ran the Mugairyu seminar. All of the Senpokan folks showed up, as well as several others. After that I tried wakizashi cutting (neat! hard!) and then we did the seated cutting session.

After the sessions we had dinner at a local seafood joint. Niina-gosoke I and crashed, Neeley and BigTony took Yamada-sensei to the bar and pumped him full of scotch. Yamada-sensei made it back at a reasonable hour, but Neeley and Tony didn't roll in until 5am. The got a good hour of sleep and they're looking good for the tournament!
at 8/28/2004 07:31:00 AM No comments:

Feeling it now...head is sort of fluffy and everything sounds like it's filtered through earmuffs. Hotel is fine; nice big buffet breakfast and reasonable coffee. Niina-gosoke and Yamada-sensei are settled in nicely.
In the morning we borrowed the dojo and ran a promotion exam. Everyone passed, though we have a bunch to tune up as folks are getting sloppy.
Came back to the hotel and relaxed. Some seminars in the afternoon but we were just hanging out. Went to some lovely BBQ for dinner; stuffed ourselves silly on ribs and pulled pork and steaks (Yamada-sensei was about to explode) and Niina-gosoke had his traditional vanilla icecream for dessert.
at 8/26/2004 11:28:00 PM No comments:

Ah, international travel. Especially on a bankrupt airline. The flight wasn't bad; I was in business, bulkhead aisle with no one next to me, so besides the fact that they didn't give me my meal choice, it was fine. Actually managed to half-sleep for most of the time. After 13 hours, we landed in Chicago, went through immigration, got our bags, through customs, checked our bags back in, and went to our connecting Ted flight to Orlando.
Chicago airport was a zoo; storms up and down the midwest were delaying flights all over the place. We sat on the tarmac for an hour waiting for our turn to take off, and landed in Orlando a bit late. Our luggage, however, was more than a bit late.
Seems they forgot an entire truck of luggage on the tarmac. So our bags were coming on a later flight and would be arriving between midnight and 4am.
at 8/25/2004 11:24:00 PM 1 comment:

Everyone crashed after the festival, so some time in the morning the pitter-patter, actually the romp-stomping, of Kairi's little feet shook the house and woke everyone up. Hiroko made french toast and we had a leisurely breakfast before heading over to National Azabu for some shopping.
By then the second little toe on my right foot was nicely purplish-red and hurt like hell. Obviously the nail that had been ripped in half left a lovely pocket of infection. Tried a couple of clinics but everything was closed on Sunday.
Scootered over to Honbu Dojo to send a package and clean up some files on the computer, then on my way home decided to stop by Hiroo Hospital's emergency room.
Doctor gave me the option of cutting and sucking out the nastiness, thereby making the toe much better much faster, or loading me up with drugs. We'll take the drugs please, thank you.
And then we finally watched the last couple of videos of KimmyMustDie, aka 24 Season 2. Unfortunately, Kimmy doesn't die. In fact, she gets away with murder.And kidnapping. And nearly killing a police officer. And losing Miguel's leg. And getting the liquor store owner killed. And a whole bunch of other things. Oh yeah, she is still really, really good at whining for daddy when he's in the middle of saving the planet. And like any good, single father, he indulges her.
But Kimmy is no match for Marie. The psycho little sister does a nice Hannibal impression, complete with backlighting and chains behind a clear plastic jail wall. She deserves her own show.
And Shapel is my hero. He's such a slimeball, I love it.
at 8/22/2004 08:49:00 PM No comments: