After cutting practice I really needed a haircut, so I went to Murabayashi for the traditional shave and cut. I think I'm on the only one who ever goes there.

Hiroko's parents came over to spend the night in Tokyo and go to some new year's festival at the Laos Embassy or something. Dad really wanted to eat soba, so we went to Sarashina in Azabujyuban and stuffed ourselves silly. Noodles is good.
at 4/10/2004 11:18:00 PM No comments:

Had cutting practice for this first time in a few months. I have to demo at the Honbu Dojo Opening Ceremony so I needed the practice. There were only five others so I had plenty of targets and time. I did alright, considering I haven't cut in a while, so I should be ok for the demo on Saturday. Have another cutting practice on Tuesday just to make sure, though.
at 4/10/2004 12:15:00 PM No comments:

what's wrong with this picture?

A game my dad used to play with us when we were kids: spot the spelling mistakes. On the road-signs, on the billboards, on the menus.
Well, we're still at it: 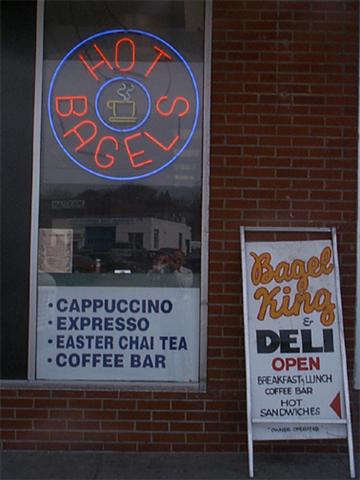 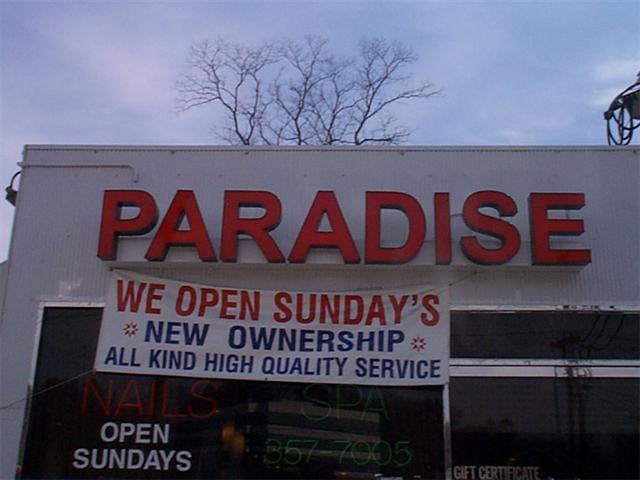 It's interesting how similar yet how different Sanno-sensei and Tanaka-sensei are. Sanno-sensei started us off with basic cuts and we went through those for over an hour. He focused on balance and stability by having us take shorter steps and not reaching so much with the arms and upper body to draw and cut. He has a couple of interesting mottos:
"If you can't do two things at once, do them one at a time." So for example instead of cutting while moving forward, we stood in place and cut until we felt comfortable with the arc and angle of the blade, then tried it while moving. Also on the draw, we tried moving the hands to the sword and getting the right hand on the tsuka (sword handle) on the centerline (not over to the left) before moving the feet.

"Now we are developing technique, not using it." His point was, if you are really fighting, yes you want to get your shoulders into the cut, drive the sword deep into the opponent, maximize the power from the hips. But we aren't fighting, we're practicing. So take it slow, keep the body upright and stable, relax, don't worry about raw power so much as fine-tuning the movements, the coordination of the whole body. And THINK about what you're doing.

After the basics we went through two kata, shin and sa, again going over them detail by detail. Shin was passable, but sa needs serious work, especially drawing while turning and cutting out straight the opponent on the left.

I usually teach at Iidabashi on Thursdays, but this month Iidabashi is on Mondays, so I'll be able to come to Sanno-sensei's practice at least a few more times.
at 4/08/2004 11:31:00 PM No comments:

Tanaka-sensei's first practice at Honbu Dojo. He was running late and grabbed the wrong sword by mistake. But it didn't stop him from being totally on it. As he usually does, we ran through the kata, five or six times each one, working on specific points. He was stressing the finer details; extending out the last cut, getting the hips positioned, controlling the sword tip. Everything move he does is centered, powerful, and effortless; it's really amazing and he's so low-key. Practicing with him is always fun. I'm glad I can go to Wednesday practices this month and next month, because there's no Akihabara practice at which I usually help teach.
at 4/07/2004 10:20:00 PM No comments:

Showed up at Honbu Dojo figuring I'd get Naganuma-sensei's class, but he was busy installing ceiling lights in the hallway (which is perfectly reasonable considering he's an architectural engineer who specializes in lighting and wiring.)
Ohtsuka-san and Niina-gosoke were putting the finishing touches on the wood panelling and trim, so I changed out and started practicing on my own for a bit.
But as luck would have it Niina-gosoke called me over and I had to help them for an hour glueing, nailing, drilling, and screwing wood together. Carpentry is definitely not my strong suit, but I did what I could.
Managed to get another 30 minutes of training in before calling it a night. Nice to have the whole floor to myself.

Because of the messed up schedule, Iidabashi practice moved from Thursdays to Mondays, so I taught at Shibuya like I always do and Ohtsuka-san taught at Iidabashi for me.
Big turn out in Shibuya -- 10 students, plus Shirata-kun who's been busy at work and hasn't been to practice in 4 months. We did some fun esoteric foot work and basics the whole time and I successfully confused everyone, self included.
at 4/05/2004 10:42:00 PM No comments: