i can't move my arms!

As expected, I woke up totally sore. Cutting practice was, needless to say, largely unimpressive. Could barely raise my arms and cut half rolls, let alone full rolls. Did a little cutting before giving up and helping some of the beginners.
In the afternoon Hiroko and I went to Chai for a much needed Thai massage, then walked down through Roppongi before heading home. Still sore, but feeling a bit better. Note to self: take it easy the day before cutting practice!
at 11/22/2003 09:20:00 PM No comments:

Niina-gosoke has been thoroughly unimpressed with our fundamentals these past few weeks, so class started with one hundred cuts in a deep stance. Then more cuts. Then some more cuts. Then finally one hundred more cuts. THEN we did kata, and finally ended with the fundamental patterns.
Dinner after class we bitched and moaned about being sore tomorrow, but we need it.
at 11/21/2003 11:15:00 PM No comments:

Got Neeley into a cab on his way to Tokyo and after picking up some last supplies at Namikawa Heibei (note to self: stupendously cheap sword bags, oil, polishing stones, and other stuff) took Tony to Machida. He was staying at a different hotel then he usually stays in, and came by train not bus like he usually does so it was a minor adventure, but eventually he got settled.
Later in the evening, completely lacking in sleep, Iidabashi practice was mellow. Niina-gosoke was watching and commenting on the upper ranks as I ran the beginners through the fundamentals and a few kata. It wasn't raining when I sped the Mightier Steed to practice, but when class ended it was pouring. By the time I got home I was completely soaked, and I mean wet.
at 11/20/2003 11:07:00 PM No comments:

Managed to get up at a reasonable hour and motivate to Asakusa for some shopping. We ended up walking all over Asakusa checking out hakama and swords parts and antiques and junk. Dave finally found the obi he needed. We got to the tabi shop but they're closed on Wednesdays so I'll have to come back some other day to get Tony's tabi.

The cool restaurant we wanted to have lunch was also closed so we ended up going down the street to a nice mom & pop tonkatsu place for some more deep fried pork. We wandered a bit more, drank some amazake to warm up, and finally headed home to relax before practice.
We got to practice about 6:30 and Niina-gosoke immediately started running Dave and Tony through all twenty kata. I was furiously taking notes and interpreting for Gosoke and he plowed them non-stop through everything.
After practice we went over to the Niku-no-Hanamasa all-you-can-eat/drink place for two hours of feeding. We piled the tables with meat to grill and got pitchers of beer and had a good time. Otsuka-san was a riot, Tanaka-sensei turned red as the beer flowed, Hoshina-san was cute as always, and Niina-gosoke and Tony got along really well. We figured out the general schedule for next year and Niina-gosoke is really happy to have Tony running the US for us.

Hiroko took the day off, too, so after a hearty team breakfast of tomato-eggs, muffins, and kiwi fruits, we took the bus up to Shinbashi and walked to Ginza. Hiroko spotted a little antique shop that had some nice art swords, and then we made our way to the shop across the street from the Kabuki theatre to buy tabi and tenugui. Of course they didn't have anything that would fit Tony's feet, but they did have tenugui and other stuff with his mon (family crest) on it.
We then went down the street to Choshuya to check out the incredibly expensive high-end stuff we'd never buy. 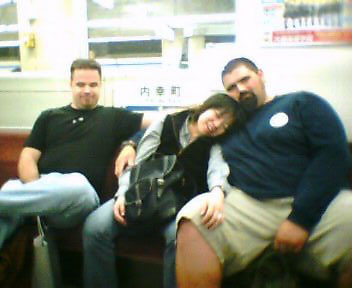 We then got on the subway and went over to Suidobashi to hit a couple of budo shops to check supplies and then got a great deep-fried pork lunch before heading back home.
Tony and Dave were jet-lagged and sleep-deprived, so we took a little afternoon nap and then ate some burritos as we watched Brotherhood of the Wolf.
Later we headed out to Roppongi and met Kevin at Castillos. Ishida-chan had to go on a business trip and couldn't join us, so we headed over to Hobgoblin to throw darts and be mellow. Finally headed home about 1am for some much needed sleep.
at 11/18/2003 11:02:00 PM No comments:

I had forgotten about Chiba. I hadn't been out east of Tokyo, deep into the motherland of Chiba, for a long time. So I purposely took JR so that I could relive my old Chiba days. With my iPod filled and the train afternoon empty, I stood at the front and watched the conductor navigate us across the river and over to Chiba Station. Got off and switched trains, marvelling at how much the station had not changed, and I stared at the monorail waiting for the airport express.
Again an empty train and I smiled at myself knowingly as I counted off the stations approaching Narita. Made it to the airport in good time and met Tony quickly. We had to wait for Dave who was to arrive a couple of hours later, so we headed upstairs to Royal Host for a quick lunch.
Dave's plane was a bit early, meaning the Narita's one-runway system was all confused, forcing them to circle and taxi for an hour before finally getting a gate to pull into. He finally came out about 6:00pm, so we got bus tickets and headed to the ANA Hotel. James messed up his tickets and was still in China, Jim's luggage somehow ended up in Texas, but other than that the flights were uneventful.

We entertained the bus with our backseat antics and the evening traffic was lite so we got home by 8pm -- too late to go to practice so we settled in and got ready for dinner. Hiroko came back about 9pm and we had a big Sukiyaki fest. After deciding on tomorrow's schedule, Tony pulled out his bargain China DVDs and we put in 8 Mile before crashing.
at 11/17/2003 11:58:00 PM No comments: